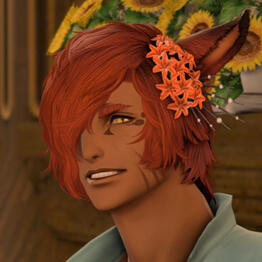 A Miqo'te who positively burns with his passions - Mateus server

Appearance
Hair/Fur: Fiery red
Skin: Medium warm tan
Eye: Amber yellow
Height: 5’5”
Weight: 175 lbs~
Build: Toned and stockyCharacter Motivation
A need to protect others and a desire to learn about his past - Y'aromirr struggles at times to enjoy the new happy life he's earned when memories come surging forth...Outlook
All creatures born of the land are deserving of the same freedoms and rights - I will fight the war for those who cannotPositive personality traits - Compassionate, Cultured, Hard-working, Honest, Knowledgeable
Negative personality traits -
Prideful, Anxiety-prone, Prejudiced, Emotionally Vulnerable, Vindictive

The Past
Y’aromirr was born in the desert of Thanalan to a devoutly religious mother and an uncaring father. Being away from his tribe and out in the wilds gave him solitude and let him study in peace without questions being asked of him. In this time, he wrote many journals about the wildlife he found in the sands and took up a particular fascination with all things botanical. He keeps these journals to his day, though they have been amended with knowledge he gained through reading other’s works.
On one of his runs, at about 10 years old, he found a gladiator injured and unable to move in the desert, and helped him back to town to see him to health. As repayment, the gladiator gave him an old sword of his and told him to ‘train under (him) some day’.
By 13 he was trained competing regularly in the Colisuem under the alias “Steel Jaguar”, deciding the name suited his tribal heritage. His fame would be short lived, however, and at age 17 a grudge-holding stranger hired a Black Mage to kill him in as he slept in his inn room. The attack left him comatose for a year, but he survived.
Upon his awakening, Y’aro did not recall large parts of his past. He set out from his tribe with the image of that dreadful spell burned into his single remaining eyelid and a contempt for all dark magics in his heart. He took up mage’s work at this point, and has been slowly learning and adjusting his life ever since.

AppearanceY’aromirr’s figure is unremarkable except for his notably large shoulder and upper arm muscles. His legs are rock solid from years of running, but do not necessarily show themselves as “muscular”. He has tan-lines at his shoulders and mid-calf.
His hair is coily and shiny, unless he has been toying with it, in which case it begins to split from its pre-set coils and into a frazzled mess. Because of his hair texture, the fur over his ears and tail also grows in with swirls and waves but remains too short to fully curl. He also grows a small loosely triangular patch of chest hair, and he likes to flaunt it to compensate for being unable to grow any form of beard. His tail is remarkably short, only hanging to his mid-thigh.
Skin wise, he doesn’t take fantastic care of himself - Palms and feet have excessive and peeling calluses that he will nervously pluck at. His finger nails are often worn and unkempt from whittling. His left cheek has 3 “whisker looking” tattoos that he received from his mother. He also has a large hooked nose.
Underneath his mass of bangs, the entire right side of his face is covered in what appears to be a burn scar; He only has his left eye and his right eye socket is healed over with scar tissue.